I figured you might be getting tired of looking at the same post title and lavender wellies so thought I should probably put up a new post.
All these pics tie in with about 3 different memes around Blogland and the first is over at Cherie's with My Place and Yours. The theme this week is Meet My Pet ~ or Our Pet ~ or The Family Pet, whichever applies.
For me it's Meet my Pets, plural. Coz I'm going to show you 4!! 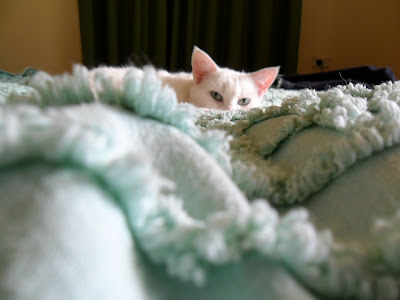 The beautiful baby of the family, Kit. She and her mother were wild homeless cuties that we took in. Kit is the most unsettled even though she's been with us now for just around 3 years. She's still a very wary cat and I'm the only one who can get near to her for a pat and leg rub and if I'm quick a pick up! Which of course she hates and struggles hard to get out of! Her mother didn't bring her to live with us until she was about 3 months old and way past socialising, but I'm happy to get whatever I can from her. I love this one to pieces and just wish we'd gotten our hands on her much earlier than we did. 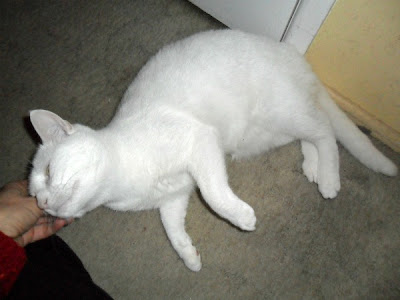 Puss....mother of the beautiful baby, and of course very beautiful herself, more so in nature than Kit is, as I do get many leg rubs and purrings and chats from her. I suspect she might have had a family, before something happened to send her out into the cold cruel world on her own, because she is that much more socialised and friendlier, but still quite untrusting. She will let my husband give her a pat if she has settled down for a sleep or just coming out of it, as will Kit too sometimes. As a matter of fact Puss is sleeping with him on the bed now(he has a yuck cold)! When I talk to her she does that loving thing with the tail lifting into the air. Oh hello, I know you and like you and I definitely know that you're the one that feeds me!  :))
She came to us over 3 years ago(can't believe it's been that long!!) and you could see she was malnourished, but I'd been chasing her away coz we already had one cat and really didn't want any more! But my husband decided he would give her some leftovers and the rest is history.
She disappeared for a few days and I did wonder if she was off having some kittens and a few months later back she comes with two wee babies. Obviously deciding that our place was the happening place for stray cats with kittens in tow! Sadly the second one was dead, we think probably run over on the way to us. I get so sad even when I think about now. But we had both mum and daughter 'fixed' and started another life as a 3 cat family! 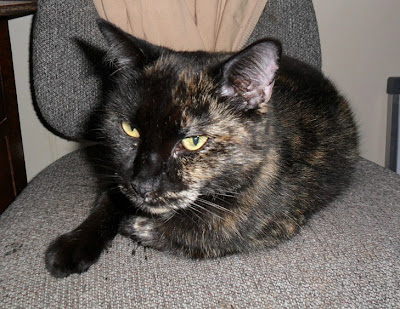 ....and this is Pushka. Our old rescue cat we got from the local refuge about 9 years ago now.
She's a cranky old fart, but we love her anyway as she's the cuddliest, droolingist lap cat we've ever known! She's lying on 'her' chair here, in the pooter room. She kept wanting to share my chair and I'd be perching on the very front of it all the time which isn't good for the back or the bum! So she got her own which is right beside mine and she stays on it........most of the time!  :)
She's now diabetic and has to have insulin shots twice a day, which of course limits many things we could do in my husband's retirement years. Someone has to be here to give them to her and she's not the friendliest cat if she doesn't know you. So having someone come over to administer isn't much of an option I'm afraid.
We could put them all into a cattery for a short time just to get to go away sometimes, but aside from the cost and the insulin(knowing that it is being given correctly) I'm very worried about how being shut up would affect the two white cats especially Kit. She stresses so very much just when we have to take her to the vet! Oh well....one day, but for now we just settle for time away separately when/if we find time/money for it!.

I've thrown these guys into the soup of family pets coz I love watching them so much! They are a blue and black bumble bee that come home to roost each night on the end of a twiggy branch that I have hanging off the side of the back steps. Don't think I've shown them on this blog, but I have on the one I share with my sister, Snapshots of Beauty.
They are the funniest little things to watch as they try to settle for the night, and that's where they stay once they have settled. A few times one of us has had need to go under the deck and have brushed against the branch they are on, but amazingly none of them were disturbed or knocked off the branch! They seem to lock on with their 'mandibles' and lock they do!!!
For more adorable Pets, pop over to see Cherie.

Now this bunch of pics links up to Jody's blog for the weekly taste of JaM!

"I've tweaked the  JaM recipe so it has a slightly different flavour.
JaM's now on Sundays and there wont be a different theme each week.
Coming up with different themes was proving too much of a strain for this little brain, instead there's 4 themes to choose from.
I invite you to take Just a Moment and share what you've


Noticed
Consumed
Created
Bought
during your week....
choose one of the themes or mix them up!"

So I've mixed them up a tad with What I've Created and Bought and Consumed. 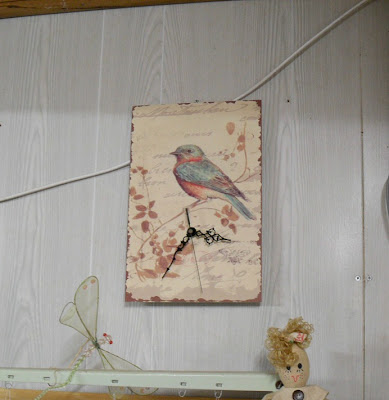 I created.........
this from just a wooden wall hanging I bought from my good friend Laura, from her beautiful little shop out at North Pine Markets at Petrie, and turned it into a sweet pretty clock after drilling a hole through it and adding the workings of a clock. Very simple, not much creating with it, but oh so pretty and functional. 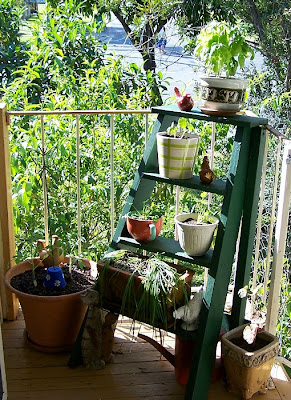 ....this handy little herb garden on my front porch with a nice wooden ladder. 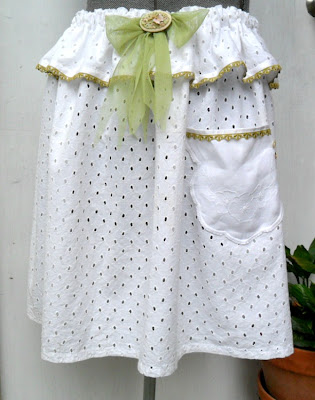 ....this lovely white apron from some vintage lacy fabric, doiley and trim to list in my store Nest in The Attic. 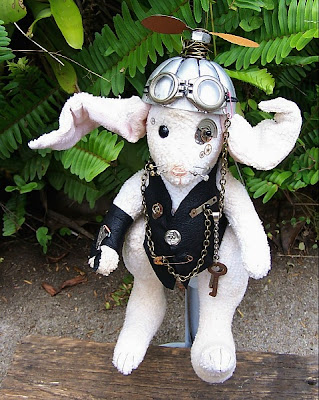 ......this steampunk rabbit about a month ago. A bit of a cheat I know as it wasn't this week, but I hadn't gotten around to posting about it, so thought this would be a good time to!  :)
I made him for a challenge to the members of Cloth Doll Artistry which I joined just this year. I didn't win the challenge, but I still love him heaps and had a LOT of fun making him. I hadn't made anything in this style and found I love it.....to look at and to make. Just can't decide whether to sell him or keep him! 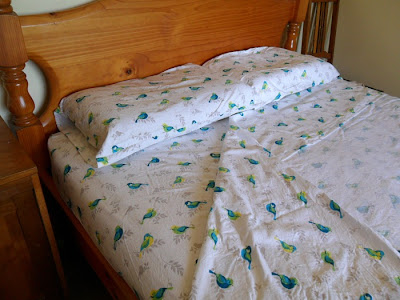 I bought this on special from Target. I'm sure I must have looked like a moth to a flame when my eyes clapped onto the set on the stand! Have you ever seen anything cuter for flannelette sheets!!!??? If you click the pic you'll see all those gorgeous little birdies much clearer! 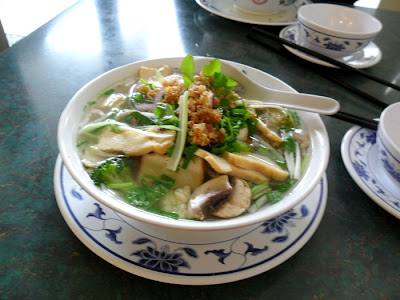 .....and I consumed this, along with a spring roll and a rice paper wrapped vegie roll, in ChinaTown, this week when my sister and I visited Fortitude Valley in Brisbane.
The restaurant is Vietnamese, and they serve a lunch meal for those in a rush called Speedy Lunch. You get this huge bowl (at least 8" across) and the two rolls I mentioned earlier, and it's at your table within 10 mins! Kid you not.
My sister swoons over the soup, always gets it if she visits the area, and would be really happy to get just the soup 'juice' on it's own to drink! lol. and I have to admit that it was all extremely tasty but oh my was I bloated! Yup....eyes bigger than the belly syndrome!

That's it for Jody's meme.

This skirt is linked to Curly Pop's 'The Make It In May' Sew Along that I joined in with in the second week of May. It could also be linked to Jody's meme under something I created too. I got it finished by the end of the month but with one thing and another never got it put up on the blog until now. Suppose I should go over and let Cam know!
You should go over there too, coz there are some amazing looking skirts listed there. They've all done a fabulous job! 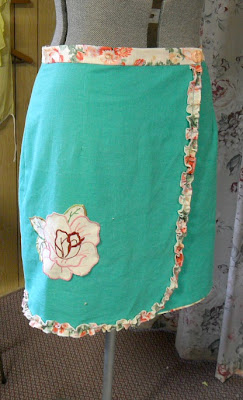 The pattern is an old, but not too old Butterick, for an ensemble. I've tweaked the skirt pattern a wee bit and then added a frilly trim and vintage embroidered rose/doiley.
Cool! Lovely new skirt for summer! 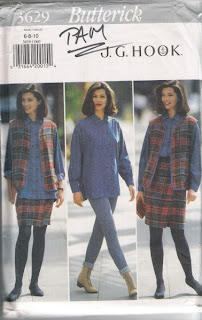 Phew! Thanks for making it to the end of this very long post. I appreciate you sticking with me.  :)  ♥

Every key opens a door. Each door opens a new day.  ~  unknown

Email ThisBlogThis!Share to TwitterShare to FacebookShare to Pinterest
Labels: Curly Pop's Skirt Sew Along, JaM Meme, My Place and Yours

Thanks so much for leaving a comment. I read every one of them, and will either respond with a return email or leave a comment here or at your blog, if you have one.